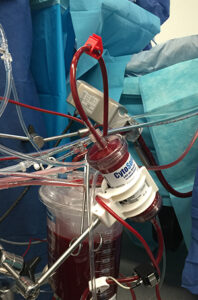 Cardiac Surgery procedures using cardiopulmonary bypass (CPB) may result in activation of the complement system and stimulation of inflammatory cytokine production due to factors such as the trauma of surgery, non-pulsatile blood flow, ischemic-reperfusion injury, and blood contact with air and the foreign surfaces of the CPB system.

This could happen since the activation of various mediators of inflammation, such as cytokines, may lead to postoperative systemic hyperinflammation with associated complications such as vasoplegia, acute renal failure, respiratory and circulatory failure.

CytoSorb therapy*, by removing excessive levels of cytokines, may be a solution with the potential to reduce post-operative complications in patients undergoing cardiac surgery.

Cardiac surgery patients with a high risk profile or patients who have to undergo long, complicated procedures were shown in clinical studies to particularly benefit from the intra-operative application of CytoSorb for:

To date CytoSorb has been safely used intra-operatively in heart-lung machines during several thousand heart surgeries.

CytoSorb has also been used several thousand times post-operatively, to control the systemic hyperinflammatory state, occuring as a result of cardiac surgery.

This flexibility in the usage of CytoSorb may allow the use in a wide variety of cardiac surgery patients who are either at high risk (intraoperative use) or who have already developed postoperative hyperinflammatory complications (postoperative use), as reported in several clinical studies.

It was observed in clinical studies that CytoSorb Therapy, when used as intended, can help in the cardiac surgery setting due to the following positive potential effects: